Dear Firstname,
Welcome to the eighth edition of the GenoPro Newsletter.  If you missed our previous newsletters, they are available online.

GenoPro version 2.0.1.0 is now available in 22 languages, and it features several improvements, including a family calendar in the narrative report.  We recommend downloading and installing the latest update of GenoPro 2007 from https://www.genopro.com/InstallGenoPro.exe (1.7 MB).

GenoPro has a powerful report generator capable of generating almost any kind of report from your family tree data.  The following article shows you how to create an HTML report to display all the birthdays of living individuals. This tutorial assumes you are familiar with HTML and have some understanding of the JavaScript programming language.

The entire source code of this report is available in GenoPro version 2.0.1.0.  To generate such a report, click on the toolbar button Generate Report, select the report skin Birthday Listing and click on the button Generate.  GenoPro will generate an HTML page containing all birthdays present in your family tree.

To view the source code, click on the button Edit Skin and open the file Default.htm using a text editor such as Notepad.  You should see the following HTML code:

In addition to regular HTML elements, the report template contains code for GenoPro to interpret and execute. The code looks almost like an HTML tag, but is marked by a pair of delimiters: it begins with and ends with .   Whatever code is within those delimiters is executed by GenoPro producing HTML content from the data of your family tree.  GenoPro supports an alternative pair of delimiters, and  , for HTML editors reporting a syntax error with and .

The very first line of code var strBirthdayPrev is for remembering the birthday of the previous individual. Since multiple individuals from a family tree may have the same birthday, it is important to remember the last written birthday to avoid writing it multiple times in the report.

The next line creates a collection of individuals sorted by birthday. The global variable Individuals contains a collection of all individuals from the document, however sorted by ID.  You can sort any collection by almost any sort key, such as sorting by name, age, date of birth, date of death, cause of death, number of children, number of pictures, occupations and more.  For the complete list of sort keys, use the Tag Definitions dialog from the Tools menu.

The next step is to iterate (loop) through the collection of individuals and generate HTML content for each living individual who has been assigned a birthday.  GenoPro offers a wealth of routines to format text and generate phrases for producing rich HTML reports.  Read the complete article online containing minute details and tips for creating a custom skin.

GenoPro offers many online services which may assist you in your genealogy research.


The Role of Gender in the Family of Diana, Princess of Wales

By Laura M. Benton, from the Multicultural Family Institute. 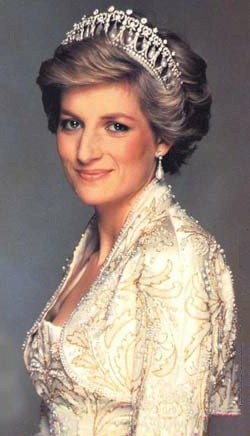 The example of Princess Diana, while particular to her family's situation, reflects common family gender problems, which exist the world over. Using a genogram to display her family history, it becomes clear that Diana belonged to an upper-class British family whose gender roles, while typical of that period, likely influenced family relationships in multiple generations.

Both sets of Diana’s grandparents had relationships which exemplified male dominance and female subservience. Her maternal grandfather, Lord (Maurice) Fermoy, was a womanizer and had multiple affairs, producing at least two illegitimate children. His wife, Lady (Ruth) Fermoy, knew full well that as a woman, her only access to power or prestige would be through a man; she had to marry a gentleman whose societal position and fortune were secure. She was first courted by Lord Fermoy’s twin brother, Francis George, but in the interest of forging a higher social status, she changed her focus to Maurice who was the elder brother, and thus the brother with a title. (Francis George never married thereafter.) Maurice and Ruth Fermoy married and had two daughters, Mary and Frances, and a son, Edmund.

Since Ruth understood the value of marrying well, and was eager to further secure her family’s position in the British social hierarchy, it was said that when it came to her daughters, “nobody was more tenacious in the social marriage market than Ruth Fermoy… Realizing that the less attractive older daughter Mary… would be a tougher sell, she fixed her hopes on the prospects of Frances and delayed Mary’s coming-out dance until she could do a double whammy with the added value of both” (Brown 31). Lady Fermoy set her sights on the eligible and desirable Viscount Althorp (“Johnnie”) Spencer, a man who was to inherit the title of Eighth Earl Spencer upon the death of his father. He was handsome, educated and considered quite a catch, so when Lady Fermoy encountered him at a social event in the spring of 1952, she was eager to connect him with her most desirable daughter, Frances, though she was only fifteen years old at the time.

“Since Ruth understood the value of marrying well, and was eager to further secure her family’s position in the British social hierarchy”

Johnnie’s father, the Seventh Earl Spencer, known as Jack, was said to be a bully, misanthropic, and to have a fierce will which was manifested in violent behavior toward his wife (Brown, 27 ), Lady Cynthia, who was generous and compassionate, but was overpowered by her dominant husband. Her connection to him was diminished further by his uncompromising rule outlawing “small talk” in his home. The Spencers had only one son, and sadly the relationship between father and son was also distant because of Jack’s domineering approach to fatherhood and his tendency to ridicule his son. Unfortunately, Johnnie learned from his father that husbands are to be imperious and the “abject subjugation of his mother gave Johnnie a complicated outlook on the opposite sex” (Brown, 36).

Within two years, Lady Fermoy had succeeded in her matchmaking; In June, 1954, Frances and Johnnie were married in Westminster Abbey and nine months later they gave birth to their “honeymoon baby,” a daughter named Sarah. In 1957, their second daughter, Jane, was born and Frances was said to be happy and fulfilled by motherhood and marriage during this brief period. But the pressure for a male heir began to mount; Johnnie enforced upon his wife the immense pressure of producing a son, an heir to the Earl of Althorp title, which would insure the family inheritance of an estate worth about $140 million dollars. It had been drummed into him by his father that producing an heir was his first priority. His young wife would go through six pregnancies before the heir arrived. Johnnie and Frances became desperate for a son because they knew they would have to leave the family home if they did not. 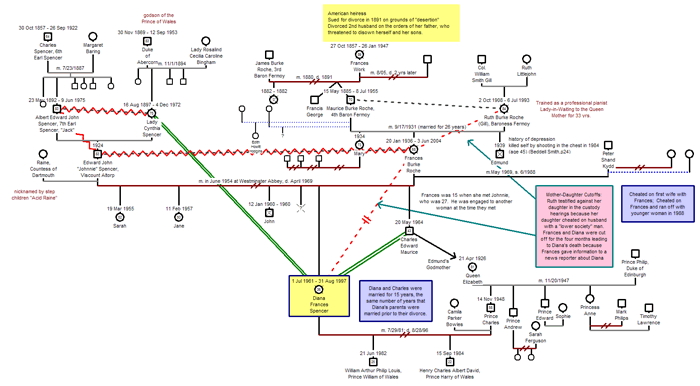 The Genogram of Princess Diana