Dear Firstname,
Welcome to the second edition of the GenoPro Newsletter.  If you missed our first newsletter, Announcing GenoPro 2007, it's not too late to take a look at it to find out all about GenoPro's newly-released version, including its brand-new features and benefits.

In the past few weeks, we have sent a survey out to everyone who has purchased GenoPro.  The survey participation rate was 43% and we received several thousand written comments on how to improve GenoPro.  The most popular feature requested for the next version of GenoPro was the Problem Spotter followed by a Better AutoArrange.

By popular demand, we have created video tutorials to help you get the most of GenoPro for creating your family tree.  For this newsletter, we have included four videos, and we plan to produce over 100 videos to cover all aspects of GenoPro.

What is a Genogram? 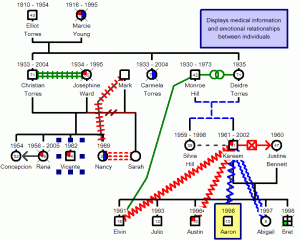 A genogram is a family tree that comes alive. Families are complex systems that interact with other communities and kin groups, of which they are a part of, and they cannot be fully understood without the wider context in which they live. Genograms contain a wealth of information on the families represented because they allow you to illustrate not only how members of a family tree relate to each other, but how they are a product of their time, by their behaviors, friendships, and many more.

“A genogram will not only show you the names of people who belong to your family lineage, but how these people interact with each other.”

Family trees are only a mere representation of generic parent and child links. However, there are complex interplays within a family unit which can only be understood through the use of a genogram. A genogram will not only show you the names of people who belong to your family lineage, but how these people interact with each other and with others who are significantly involved in their lives (clan or tribe members, slaves, tutors, godparents, live-in nannies). For example, a genogram will illustrate how your Vietnamese grand-mother's arranged marriage was determined before she was born through alliances, and how your African-American cousins ended up in Nova Scotia in the early 1800's. Even if you want to keep your work simple by including only your immediate family, you can quickly illustrate in your genogram that your uncle George and his wife Anita have two children, but also that their youngest child was sent to boarding school, that Uncle George suffered from depression, was an alcoholic, and a philosopher, while Aunt Anita has not spoken to her brother for years, has breast cancer and has a history of being unfaithful. Family history has never been so interesting!

Benefits of a genogram in genealogy

As a genealogist,  genograms will allow you to depict significant persons and events in your family's history. Genograms can also include annotations about the medical history and major personality traits of each member of your family. Genograms will help you uncover intergenerational patterns of behavior, marriage choices, family alliances and conflicts, the existence of family secrets, and other information that will shed light on your family's present situation. What better reason to do genealogy than to be able to learn life lessons from your ancestors...


How to put together a medical genogram:

Record the age at which the condition began, as this can be relevant information. For instance, did your grand-mother develop breast cancer at age 39 or at age 80? This may help to determine if you are predisposed to such a disease. Information on the age at death of deceased relatives can also be relevant. Don’t forget to include the ethnicity of your ancestors, as some genetic health problems occur more often in specific ethnic groups.

“A medical genogram is helpful in determining patterns of disease or illness within a family.”

A medical genogram is helpful in determining patterns of disease or illness within a family. Parents are an excellent source to begin with in collecting data: ask them about their parents, their siblings and their cousins. Older relatives such as grand-parents, great-aunts and great-uncles can also offer lots of information. Some relatives may not be comfortable with the idea of sharing their medical history or that of their close relatives. This is especially true in cases where the health issue is associated with a social stigma, such as obesity, physical handicaps, mental disorders, or AIDS. Also, they may not be aware of diseases that occurred in their family when they were younger. However, whatever information you can gather can prove to be helpful.

Ask your relatives if they have collected family trees, charts, or listings of their family members. Health information may be recorded in baby books, birthday date books, or a family bible. Some pictures may also reveal a case of polio, or other physical disorders.

Medical records are the most helpful written resources for your medical genogram, but they may be difficult to obtain due to confidentiality limitations. You may want to consult death certificates, as they include a "cause of death" section which may be helpful if death was the result of natural causes, such as an illness.

For those who have been adopted, medical genograms can be a real challenge. Your adoptive family may be able to provide you some information, or you might be able to gather some from the adoption agency records. Again, if your biological parents have passed away, their death certificate may be of special interest.

When you share your genealogy research with others, it is important that the information you provide is accurate and verifiable.  GenoPro has a unique mechanism to document sources and citations, offering a flexible hybrid interface to record where information came from.  Each major event, such as birth, death, or marriage has a dedicated source field, and each object such as an individual, family, or picture has a dedicated Sources tab for adding as many sources as necessary.

The process of adding a source is rather easy; just type a name in the dedicated source field.  Internally, GenoPro will create a source object where you can edit its content later, including changing the source name or adding pictures.  To edit a source, press Ctrl+E and you will get the following dialog: 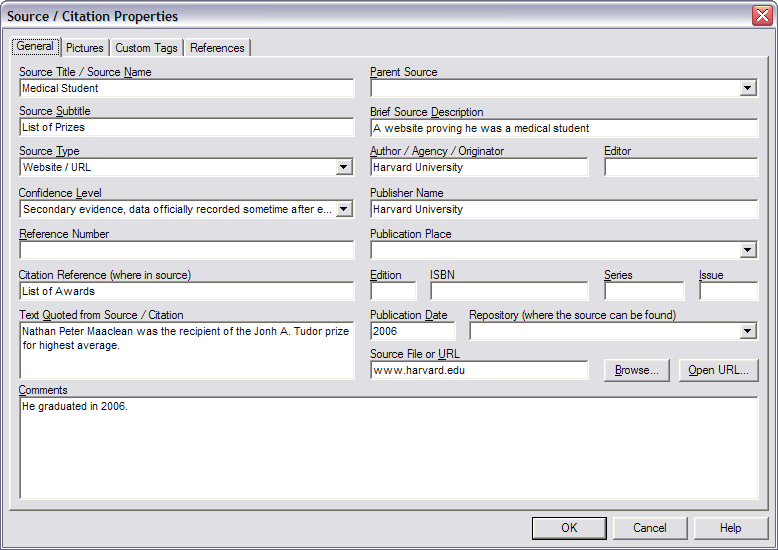 Documenting everything in genealogy searches is not the most exciting thing to do, but it will allow you the possibility to go back to these citations to verify questionable data when conflicts occur and to pursue your research in the original record should you require more information later on. Most of all, it will help others to benefit from your documented research in their own searches, just as you have benefited from the help of others along the way.

In our next newsletter, we will include a video tutorial how to create hierarchical sources.  This way, you will not have to duplicate information when creating similar sources and citations.